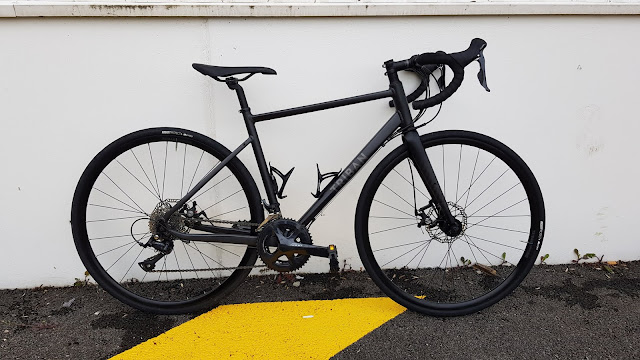 Decathlon released its new and improved Triban 500 series. This budget-friendly road bike has been rebranded from the name Btwin to the more catchy and simpler name known as Triban.

What you are about to read isn’t just a full review on the Triban RC500, I will also be comparing it against the older brother in the series, the Btwin Triban 500.

By comparing the two budget-friendly road bikes, we can see how they have changed over the years.

My main objective is to answer the question of whether this Triban RC500 is worth the upgrade from the Btwin Triban 500.

Let’s start by comparing the numbers.

When we start comparing the numbers of both these road bikes. You’ll notice on the surface they seem quite similar. But when we dig in a bit deeper you’ll start to notice how the Triban team at Decathlon, have drastically improved the quality of the Triban series.

They have addressed many issues that plagued the previous models, and they have created an extremely high-quality road bike.

For testing the two road bikes we decided to go on a backpacking trip where we rode 200km across southern France. We started from the Pyrenees Mountains and finished at the Mediterranean sea.

I was joined by my friend Pierre and he rode the Btwin Triban 500 and I rode the Triban RC500.

Weight vs Materials vs Durability

When we look at the frames that they've used on both these road bikes, we start to notice that the frame on the RC500 feels far stronger, more rigid and less flexible than the previous model. The Btwin Triban frame on the other hand feels more flexible and less rigid, especially when we loaded our bikepacking bags onto the bike.

The carbon fork feels more lightweight and seems to be more aerodynamic than the previous fork, I will say design-wise the carbon pattern on the RC500 looks a lot better in my opinion.

When it comes to the headset it feels more robust than the Btwin.

The tyres on the RC500 have been drastically improved, for comparison, the previous model came with a brand called Hutchinson Equinox. Within the first few weeks of owning the Btwin Triban 500, we changed the tyres for a puncture-resistant pair, which improved the riding experience.

Our RC500 came with a pair of Triban Resist+ Tyres and they seemed to have decent puncture resistance from our testing, but results could vary.

On the plus side, the front fork and rear wheel clearance are much wider than most road bikes, this is mainly due to the fact that the mechanical disc brakes provide extra space compared to classic rim brakes.

What this means is you can add tyres up to around 35-38mm before they start touching the frame and fork, allowing you to convert this road bike into a gravel bike.

Gravel bikes can provide you with far more flexibility with the terrain on which you wish to ride.

The RC500’s stem, handlebars, saddle and most of the components feel much higher in quality. From the tiny bolts that hold cables down or the cables themselves, every little detail has changed.

I would say that comfort feels about the same on both bikes, not super aggressive for your posture, but not so relaxed either. This is probably because both of them are road bikes, and the geometry is designed to be more aerodynamic.

For both bikes, the saddle is honestly rather basic and I recommend changing to something that you might already own. That being said it’s not terrible and offers decent padding for rides of around 3 hours.

The Triban RC500 gears and shifters are absolutely fantastic at this price point. On our model, we got the 2019 version of the Shimano Sora’s (R3000). With the upgrades Shimano made with the Sora series, they feel just like the 105’s or even Ultegra’s. Long story short they shift buttery smooth and yet each click feels just right.

Our RC500 came with 27 speed which gave me plenty of gear speeds to choose from. Perhaps downhill the RC500 felt a bit faster than the Btwin with its slightly smaller chainrings.

The groupset on the Btwin is basic but it’s built for function at a low cost. Shifting feels completely different and it’s not as responsive as the Shimano Sora’s series but I will say that even after many years the Microshift shifters are still doing their job, to just change gears and click into place. The only thing on the Btwin is that the bolts they used have started to strip on the heads and all of them need replacing after 4 years.

Btwin brakes are adequate just like the shifters, but not even comparable to the mechanical disc brakes on the RC500.

The hoods on the shifters are fairly comfortable for long rides and with the drop bars you can change position quite frequently but as I said before the position is semi-aggressive and takes time to get used to. You can go for a flat bar instead or any stem length you prefer to change your position, but there is no escaping its road bike geometry.

The major changes between these two bikes are the wheels, the brakes, the groupset, the tyres and many of the finer details.

The wheelset strength has been improved. I would say that a major downside of the Btwin wheelset is, that they are, single-walled and very soft alloy rims. The RC500 wheelset is strong and robust enough to carry heavy loads, Decathlon state that the rim joints are welded rather than pinned together, meaning lighter and stronger.

You have the option on both bikes to add mounted racks but the RC500 can carry more weight.

I personally love the new redesign of the Triban series, the Btwin now feels very dated. The new Triban design to me feels more elegant, minimalistic and yet more feature-rich at the same time.

Which one would you want?
In my opinion, these two bikes are not the same. They are both road bikes but one bike gives a stronger peace of mind when riding and the RC500 has the option to convert into a gravel bike.

The main point I compared yet is the overall price. In our current market today, the RC500 is 400 euros (roughly) more than the Btwin. The Btwin is available on second-hand markets and you could probably get it for as little as 100 euros.

I will say if you have the money to invest in a product that will last you a long time, then go with that option. But if you simply need a mode of transport that can get you from point A to point B and you don’t care how it looks, the Btwin is a decent option as well, especially if you on a low budget.

Overall though, the Triban RC500 is a fantastic value bike for the money, in my opinion.

Yes, it is more money upfront but that’s because you're paying for a bike that has more robust components and is a 2-in-1 bike, that is convertible from a road bike into a gravel bike.

Decathlon also offers a lifetime warranty on the frame, stem and handlebar.

I think both bikes will do the job for the price point, but the RC500 offers more flexibility for, bikepacking, commuting, fitness training, transportation, bicycle touring, gravel riding (with wider tires installed) and offering all-around better performance.

Weight-wise these bikes are the same, so there isn’t a huge difference when climbing up and down hills or mountains, that depends more on the rider.

You could add upgrades along the way to enhance your ride on the Btwin, but if you've got the extra money to spend on the new RC500 then I would go with that. 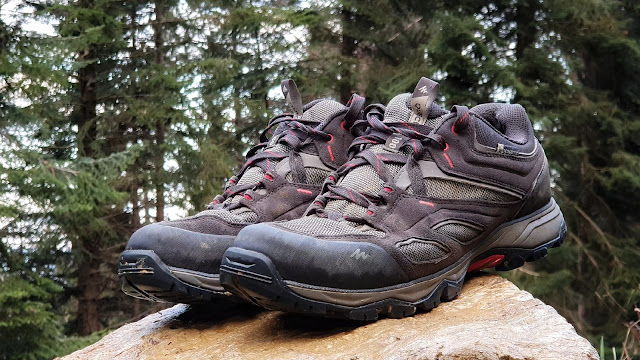 Best Budget Hiking Shoes From Decathlon After 6-8 months of testing, I wanted to share my full in-depth review on these, Quechua MH100 budget-friendly hiking shoes, from Decathlon. I have done plenty of backpacking with them in the Pyrenees Mountains along the GR10 and GR78 trails. I even use them almost daily to go explore local forests and to collect my weekly groceries. When it comes to testing the grip of these shoes, I’ve walked on a variety of different surfaces and in many contrasting climates, for example, in the deep snow of winter, along local muddy trails, in wet weather conditions, heavy summer rains, across rivers, wet slippery rocks, dry arid climates, and down steep gravel trails. For context, my previous shoes were from Karrimor, they were a lightweight pair of trainers and my trusty leather Hi-Tec hiking boots, which will be useful for some perspective. These Quechua shoes do claim to be waterproof but I will explain if this is true or false from my real-wo 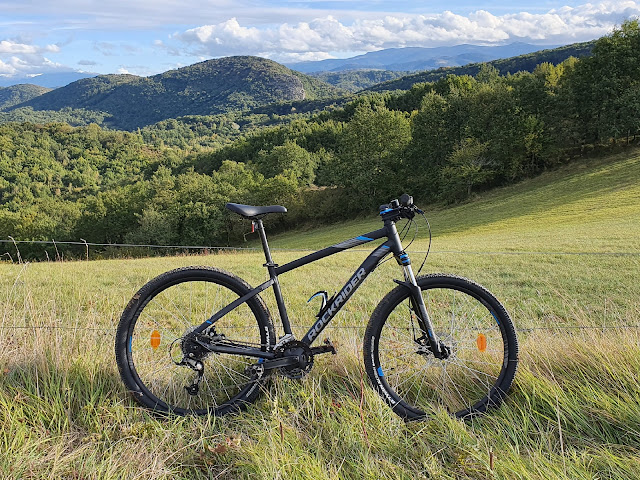 Rockrider ST520 Review Has decathlon created the best budget mountain bike for the money? After 2-3 weeks of riding with the Rockrider ST520 V2 (2020), my first impressions have me happy with the purchase, but there are a few caveats to the product which can be improved. The bikes full specs are listed over on Decathlon’s website but below are the specs simplified. Let’s start off with the numbers. Specifications (Rockrider ST520) Weight 14.4 kg Shifters 24-speed Microshift Brakes Tektro Mechanical Disc Fork Suspension 80mm Frame Aluminium (Lifetime Warranty) Wheels 27.5” Double-wall Rims Crankset SRAM S200 Triple-chainring (22/32/42)   Weight vs Materials vs Durability When it comes to the durability of this bike the frame and the wheels are incredibly robust. I'm very happy that decathlon offers a lifetime warranty on the frame, it gives you great peace of mind. From my past experience, I can highly vouch for having double-walled rims (for the wheels). I have had sin 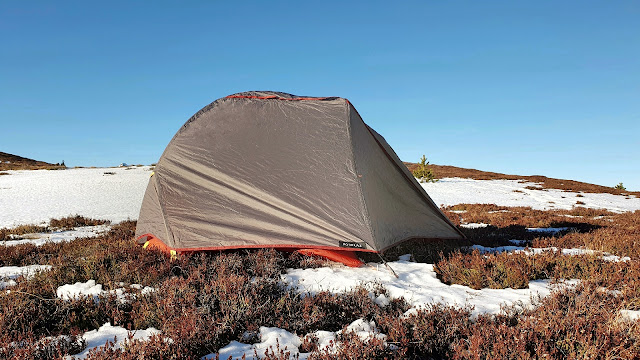 Decathlon Ultralight Backpacking Gear? After 3 weeks of testing and multiple nights of wild camping, I wanted to share my full review on this ultralight tent from Decathlon. I will be comparing this tent to my old trusty 4-year-old R.E.I Passage 1 tent. Which will give a better impression of the Forclaz Trek 900 materials, and its overall design. Let's start off with the numbers. Specifications (Forclaz Trek 900) Weight 1.3 kg Packed Dimensions 39x11x10 cm (4L) Standing Dimensions 210x70x110 cm Size Capacity One Person Seasons Spring, Summer, Autumn Materials 80% Polyester, 20% Thermoplastic polyurethane Inner chamber 65% Polyamide, 35% Polyester Hoop Lighter Or Less Durable? As spent time with this Forclaz tent, I started noticing how not too much has changed over the last few years, especially in the ultralight camping market. Everything is getting much lighter that is true, but at what cost? Lighter materials are great for bringing down the overall weight, of these tents